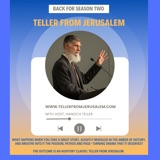 The State Department was Compelling Truman not to Recognize Israel, Someone Needed t…

TFJ: The Birth of Israel   Series 2: Episode 6 The Relief Column sent to the Etzion Block were buried in a hasty, shallow grave. When Israel liberated the Etzion area in the Six Day War the remains were brought to Jerusalem and miraculously identified.  As the first stage of the War of Independence was not going well for Israel, there was fear that the Un… Play episode