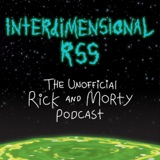 *UPDATE* We recorded this on Monday night, released Tuesday morning. Few hours later Adult Swim released the news that they're parting ways with Roiland. We added a quick intro and left the rest of the episode describing the allegations for context. This isn't an episode we were excited to do or a topic we were excited to talk about, but we needed to do it and… Play episode