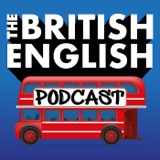 Bitesize Ep 36 - Pt. 2 of A Parody of a Children's Book by a British Comedian

In this episode, Charlie continues to retell the parody of the British Children's Book "The Tiger Who Came To Tea" called "The Tiger Who Came for a Pint". This was written by a British Comedian called Sean Lock who introduced this book to a live audience on an episode of the British TV Game Show called "8 out of 10 Cats does Countdown". This parody will expose y… Play episode