BLOOD ON THE TRACKS Season 3: A Bob Dylan Story 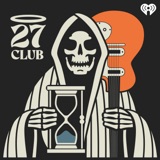 Hey, Blood on the Tracks fans! Listen to Season 5 of the 27 Club to hear the insane details behind the life of one of rock's greatest icons — ​​Ron "Pigpen" McKernan. A founding member of the Grateful Dead. Pigpen wasn't just a member of the Dead. He was the Dead. But just like Brian Jones in the Rolling Stones or Syd Barrett in Pink Floyd, Pigpen felt his role … Play episode