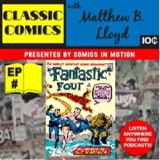 Classic Comics with Matthew B. Lloyd: Episode #30 Fantastic Four # 4 The coming of t…

He’s arguable Marvel Comics’ oldest character- Namor, the Sub-Mariner.  As the Golden Age dimmed Namor fell into comic book limbo.  This episodes looks at the issue that not only brought him back, but introduced him into the nascent Marvel Age of Comics, birthed just a few months earlier in Fantastic Four #1.  The Sub-Mariner returns in Fantastic Four #4! You… Play episode