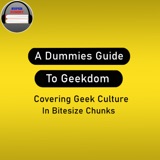 A Dummies Guide to Geekdom: Moon Knight For Dummies

In this episode, we're joined by Scott Weatherly to answer 'who is Moon Knight'. First appearing in Marvel's 'Werewolf by Night' in 1975, Moon Knight was initially created as an antagonist for the title's hero. The image of the character stuck in people's minds and over the years, he became a much deeper and more complicated character. Scott gives us an idea of… Play episode